August 26th is Woman's Suffrage Day, commemorating the date the 19th Amendment to the Constitution was ratified by Congress in 1920, giving all American citizens the right to vote. The village of Cranberry, Venango County, Pennsylvania, witnessed a moment of the Suffrage movement's history when the Justice Bell passed through in 1915. The Justice Bell or Woman's Liberty Bell was a replica of the Liberty Bell created to promote the cause of woman's suffrage. Mounted on the back of a modified pickup truck is was taken on the road to all 67 Pennsylvania Counties.

At the time, my great-grandparents Jess and Lizzie Melat lived in Cranberry which is located on the main route between the county seats of Clarion and Venango County. Lizzie or Jess captured these photographs of the bell and a woman delivering a speech from the back of the truck to the residents of Cranberry. 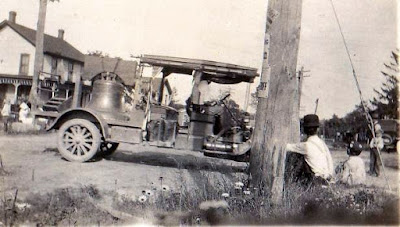 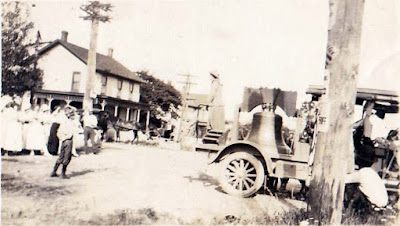 According to Wikipedia, the Justice Bell was a replica of the Liberty Bell, but did not have the crack and the words "establish JUSTICE" were added on the top line of the inscription. As a symbol of how women were being silenced, the bell's clapper was chained to the side of the bell until women were permitted to vote. It was rung in Philadelphia following ratification and continued to tour the country. It is on permanent display in the Washington Memorial Chapel at Valley Forge National Park.

Posted by Kipp Melat No comments: